lightspeed and galaxies and biology and geology


Looking at NASA space pictores, like the ones from the Hubble can be humiliating.

My desktop display has a few at this time, and one has a few billion galaxies dotted around in it.
Not a few, billyans!

When you think about it,  Andromeda Galaxy, the closest galaxy to The Milky Way, is only two million light years away, and it is calculated by some people both are collide at some time down the track, after we are history.

I hated to think of infinity when I was very young. Like thinking that God has you, and you, and you as well as me on his mind 24/7 and is all around us- both are plain creepy and scary. Now especially- is that not lurking or what ever?

Recent reports are of some starlight that is {another} calculated to be as old as the universe! That calculation is supposed to be close to 12 or 14 billion years old. Whats a few billyan tween friends?

But really, it's colossal.

Driving a car to the moon, [yeah, try it Bill Gates] is a bit of a trip too. The average Earth-Moon distance is about 385,000 km, so allowing for drink and bathroom stops every two or three hours, a sleepover some where, it would take the the Griswolds a few months if get 600km done a day... or a year or two?

And another thing, after watching the Japan tsunami videos again, (sorry, I am a Geologist)  and after reading books like these that I have just finished on my Kindle#2-

"Power,Sex Suicide : Mitochondria and the meaning of life" by Nick Lane and
"Life's Ratchet : How Molecular Machines Extract Order From Chaos" by Peter F. Hoffman, giving me a few intense weeks I tell you! Highly recommended to everyone.

So- life and nature are not connected apart from chance? An earthquake or GammaRay Burst or a small addition the a mitochondrial chromosone, and ooh la la, life is different.


Well, this is what I am lately!
Either up or down, not wildly swinging though. 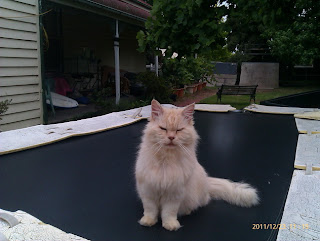 With people and government and overseas news.
With the kids a little.
With me sometimes.
Not with this cat, the other one at meow-l times anyway!


The flavour of Luck may come into it. I try to dream of winning lotto, not hard work, to make up my shortfalls in life. My swings and roundabouts are heavy hitters at the moment, but not enough to swerve off the road left or right! Driving or in decision making anyway.

It should all pan out, it's being the supportive parent that is bugging me a lot. Life is moving on, and I am swirling along, complaining about it while there are more worse off.

The years I have spent being somewhat human, and therefor a participant/observer in the social and incredibly weird world we live in has has always made me notice things that are just plain strange.

And this is besides politics and religion- Gaddafi, The Ayotollahs, Popes & Presidents [i.e. Bush], examples of the immediate present and past- and social niceties and taboos that people have taken up in order to try to take over the world from the conventional order of plate tectonics and mantle plumes [the prime driver of evolution- see Japan- recently] and the oxygen exhalers [blue green algae etc etc the original "world leaders", the secondary life drivers] and then the ones that depend on those processes [bacteria- where we are derived from according to some experts, and viruses], and of course natural selection or evolution of  those singularly spectacular processes in them selves [Wikipedia has some excellent articles on those BTW, and on the Fed too!] A little rant from an irrationalist...

Okay, we are the parasites on the face of the planet. Blue green algae, bacterium, viruses- they will out-last us all. I mean, if a few simple "organisms" are still around after a few billion years, that means that it is hard to kill em... and undoubtedly these primal organisms will be around for a few billion more years, no matter what hits the planet- asteroid or human mal-adaptions. If they and their descendants were not around, what would we be living off anyway?

So if you have read up on some biology, even glancingly like I have recently (wikipedia of course), and then look at a photograph of a crowd of penguins, bears or people- or fish or bees- they are strikingly- what? Bilateral? Left and right, two of this, two of that, one of these and one of those. Legs, arms. Faces... Similar. We need faces to identify each other or we would be like fish in the schools [that are disappearing at a rate not due to natural causes, but anyway], twisting toward or away from food and predators, and not individuals- oh, the fish might be identifiable if observed in smaller groups- like goldfish and the aquariums they live in- kids always know Their Fish!

So if there are a few "x-illions" of organisms, I bet there are countless repetitions of larger multicellular life too- Dopplegangers as far as DNA goes. Like goldfish for example. And have you heard of the expression that similar or too dissimilar personalties cause conflicts in the workplace?

So after this somewhat laborious dissertation on geology, biology and perhaps psychology-
I believe we all have twins distributed throughout the population! Not the same town so much as anywhere.

You walk down the street, and someone will remind you of a person you know well.

It may be the way they are walking or talking, or the shrug or look they give in an exchange. Just weird.

And then you sort of know how to react to them, or just do so in an unconscious way.

An example. I have a little "racist" reaction to redheads- or real carrot tops. I am always a little selfconcious at a level that says- "don't trust them"! Why is that?  Some past experience tells me that they may be a bit annoyed at being so unique- a chip on their shoulders type attitude- that as a child they may have been picked on or bullied too much for being "so" different for their red hair? Hot tempered? A Learned Reaction Behavior? So I class them as a species I suppose, that behaves that way. "Always". And when people dye their hair red- what are they looking for really? A better social; intercourse with the rest of us? I better watch out, my cousin's boys are so good natured in contrast to other red heads- maybe a generational change has come about? Although, for some mad reason, some researcher has written up that as a Hair Type, redheadedness maybe being bred out of us due to the mass migrations all over the world, one of the northern hemisphers's unique traits will be gone in a few generations, that aberrant gene losing out as it is not a survival trait needed anymore. Or was it that the Vikings changed their preferences from redheads to blondes... [and nice boobies?]

Or another strange occurrence- a child exhibits a behavior that reminds me so much of a adult I only know through the media- they may have a similar sound to their speech pattern for example. A duplicate personalty? I will never know that media person, but it is so amusing that they are and were so alike, would they have similar personalities too?

Or an overseas friend-

Or my sister- the younger- reminds me of others so much in that generation. Are they are being cloned from internet participation or what?

You have to read these:
By the way, I have just finished reading a few great books or three on my Kindle#2-"Power,Sex Suicide : Mitochondria and the meaning of life" by Nick Lane and"Life's Ratchet : How Molecular Machines Extract Order From Chaos" by Peter F. Hoffman.That was a few intense weeks I tell you! Highly recommended to everyone.
Posted by tony ford at 11:39 AM No comments:

No and no, apart from the money and challenges

A call the other day from an old friend got me thinking a little bit about company and fulltime work.

As myself and a single dad, the answer is pretty easy. If I retired [ha] tomorrow, I have too much to find out, I would never be bored!
The Kindle has me sucked in, I may have to unsubscribe from three SF magazines I have been buying since '79.


27/4/2013
Things change, got myself a great job that may last a few more weeks at least as a springboard to more better work as a geo, on the second Kindle, west wall fixed, car and van running, gels in secondary school and oldest boy a year from graduation, MS under control, bank balance balanced!