Should I avoid another bad hair day by..?


Hmmph. Dunno. This week has not panned out as a balance of good v bad.

I have been trying to help out a friend, and by their absence and lack of telepathy, I have on one hand been not exactly clear in my communications, which left me feeling an idiot at not getting a good Idea of what is required because what ever I have done, it's not quite right or clear and I am confusing people. I know I like to think I am smart, but at the moment... I think I am on the right track now, but also think that a third party might be better employed at the [or for the] required expertise. I hate that, I like to help out and excel in that endeavour, or any for that matter. Kludging not a good trait notwithstanding that I can do that too. Should I have another bad hair rant at my friend- nah, I believe I have to see from their point of view that they really would like to do the chore themselves, but circumstances... Marvined.

The low paying jobby I have has not been exactly heart warming or well paid for the amount of time and effort needed for that either. I really feel like with a brain the size of a planet, and my expectations, the world could be left turning the wrong way. Marvined. And the environmental factors left me seething when the co-workers supplying me with work, did not get things right and I had to walk a few extra meters and get them to get their act together so I could achieve more with less effort myself...

This does not sound good I know, but these days time is money, efficaciousness is not highly rewarded  but enormously necessary and mental state [happy now?] not regarded as required. It appears.

Then on the family front this month: My dear brother and family are off skiing in a better place and cheaper too. My sister is nearly too busy to go visit, her time is like mine- busy [family, work], and/but/or with the the added twist of a four o'clock start in a week [here you should be able to hear the Simpson's catch-cry of "Ah ha!" or Muttley-like]. Ah well...  My dad and another brother have gone and bought a little yacht to do up, be nice to live that much closer so I can join them on Port Phillip Bay more than maybe the once a year I see happening. Then the youngest brother is off accross the continent to look after his boys racing their Karts in a national championship. And my baby sister is cooling her heels, waiting for the fiance to get home from the rails... And #1Son is visiting NY and the nearby N.Falls for his birthday next week.


Thursday... The washing machine, another bad hair day there!

I spent half an hour or more traipsing about the house going backwards turning off wall switches in each room to track the infidel, and forwards flipping the detector switch back on. I did not want it to be the refridgerator, but at the same time hoped not the bloody clothes washer either. Cannot afford new ones this month of either after the last six months. Bloody Consumer Society, love it and hate it. The thought of a major electrical problem in the house wiring had me edgy too- what about the TV shows I like? See, I am as shallow as... Ended up being the washing machine.

I can sometimes repair stuff around the house, but RTFM was not going to help me out here.

Not happy Jan. It maybe one of the last things in Tarn's "dowry", but I would like to be able to keep things a long time, especially the washing machine. [The drier is out side awaiting its destruction. Or recycling...] The poor old washing machine, a trusted brand, maybe on its last legs too. The repairer will "be straight on to it".When he has time.  Marvined again. I may have to borrow my sis-in-laws machine this weegen? At least the winter holiday break means no school clothes needed for a few weeks, as long as we have enough socks and underwear to last until Buckies verdict on the machine...

I see that as I get older, the care and avoidance factors conflict when it comes to supervising young adults and their Friday Nights Out. A small party turns out not to be, the backyard late night weather turns cold and loud [unfortunately not  rainy- bugger]. I end up having to say to the 2am laggards that don't/can't/won't go to the shady nightclubs- if they really want to be able to come back here at least another time, then they better go home now, and they were smart enough to scat in ten minutes.

The detritus got up late... with bad hair, Ah Ha.


This is not that it's really a family oriented blog of good and bad news etcetera.

If you know about this or this you know I get cross with the shower sometimes. Like: When the plug hole is PLUGGED by child hair (or even the grey, ok). Or when the drain gets grown into by roots of grasses or vines or trees. Or going gross fishing, cleaning wise.


Showering at full steam (haha..) the footwell starts to fill, threatening an overflow.
Not again!
Pull the wad of hair from the plug hole...?
Still filling.
Not filling due to that pitiful wad of [LONG!] hair.
Need to do something else, check that the drain outside is not overflowing. Again.
NO!
Hmmm. Ah well. I'll get to it someday.


Half naked and ready for a shower. Hmm, filling again.  And while the blockage is on my mind I streak outside to grab some speaker wire from the Alcoholery.
Once back inside safe from prying eyes, I bend the speaker wire into a semblance of a hook and poke it down the plug hole. Deep Deep Deep, and pulled out some hair from the U-bend.
Not so good an Idea Marvin.
Return to the Alcoholery for.... dadadadadadadda dem... [drum roll]----
hanger and a pair of pliers
Bent wire to suit. Slip it down the plug hole, and lucky for me the "strainer" piece comes free. Because as I rotate the fencing wire kludge type hooking device and pull it up.... 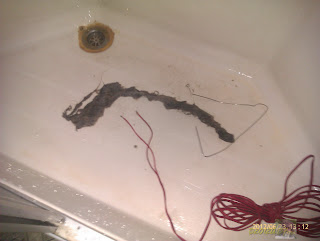 No NO NO Not "Some one's".
Just a gloopy hairy soapy smelly MESS of, well, everybodys' HAIR!
Not funny dude, but I did not run screaming dripping to the trash can. Just like... naked.

That's just Gross Fishing for ya!
Posted by tony ford at 3:53 PM No comments:

I have been looking forward to watching the transit of Venus across the sun for nearly a month.

And missed it. Because. Work!
And catching some flood events around our town!

I pulled the El Cheapo Telescope from the lounge to the back dor last Saturday in readiness for today, Wednesday 6th June.

Forgot all about the transit while I rushed around town today. By the last shift, snowed under that I missed the transit action by half an hour...
But got some pleasing pics of some floods too:

Paid that day
Bill for gasman

When I got the bill for the last tradey to do a job for me, I thought he would appreciate a quick payment.

The snail mail bill arrived a few days after the job was done (done in less than one hour remember!) gave me another seven days to pay it.

"Sticker shock" shocked me as well. Bugger! For that little job?

Nah, whatever, I thought I would do the right thing and go into hock on the check account for him vis the 'net, and sent off a appreciative thank you email too as well.

You saw what they (tradey with a helper) did, with a ten to fifteen minute "consult" over old instant gas water heater: everything was working so just replace cover with a shoppè made one (in less than 20 minutes), and while they were there replace a stove top, also way less than 20 minutes. The stove top had been waiting for nearly 15 months. The last quote to install was excessive, but then...

The hourly rate for this huge job was: