marvined again
but killed two birds with one gas man...

walking in to the yard, noticed cover on gas water heater looking worse than ever
pulled it off to see how bad the rust was.
the cover fell OFF.
not funny dude.
some DIY?
wired it up, but the wind blew the gas out at the same time
OH OH
tried to relight the bastard.
no go- FAIL
3 kids and me and NO SHOWER
buttons stuck or broken?
no leaking gas tho
bugger- WORK time
later- call a gas man- immediate response!
around less than 5 minutes
CANNOT buy a new cover for less than half the price of NEW UNIT?
wow, hmm, the credit card maxed already...
can we relight it?
no
call de boss-
"use more effort with pliers, swing OFF IT!"
relit
Ahhch, Bach, es goot
can fold a cover up too? be back in 15?
OK!
Oh, and while u r back here
look at the stove top inside...?
Yep!
All goot, tankuse.
except...

Waiting for the bill...

Successes, Failings and successes this week

In black and white: the kids, the cats, the cars and me.

Celebrated Tarn's fifty-first birthday quietly this week with the three cheeky little monkeys. May have a pizza with her dad Friday. Mine soon enough.
[new addition- at bottom 22-5-12]

Finally found the problem with the windscreen wipers not wanting to work on the family vehicle. Or, there was a short in the tailgate wiring. The wiring loom passes through lots of holes in the car body, and the auto-electrician I had to see in the end, spotted some bare wiring, on the loom from the car side of the tailgate, not exactly where it passed through to a protective tube, but further inside by a few cm/inches.

Ah backhgh, That Was All!

Mark the car sparky just wrapped some tape around it and we put it back together. Thirty three buckaroonies though, and a 40 km drive. Self findable?

Patience and money, patience OR money?

Then. THEN... Well, Back then... Last week actually, the van really started to play up.

The battery would not turn the engine over after a cold night. A few times the last month. New one purchased. STICKER SHOCK!
THEN...
There was definitely a wobble from the front tyres, booked in for new tyres. Went along to the wrong tyre garage. The guy at the right one said he had just sent some-one to where I had just been. That was funny. Until the STICKER SHOCK hit me again. There was bare metal showing on the old tyres...

Gel#1b managed to drop my old fluorescent  desk lamp and broke the tube. New one. And a ballast. And a bit of maintenance.

Gel#1a needed new globe in her bedside lamp. A few nights later spilt red coloured drink all over the old flowery carpet. At bedtime. Her sister's bottle of course. Another late night.

Son#2 was picked up on his job so he could Drive rather than pedal, and as I put the bmx in the back of the wagon, the front wheel dropped off...........!!!
Another front tooth nearly lost? The first one he lost is going to cost an arm and a leg and more to replace. I may have to mortgage his phone and bike...


And the beer, a wheat milk stout, I started to brew last week, does not want to ferment at all. I wonder why- fed it some DAP...

The white cat left us a smelly reminder this week. We could not track where he had left it. Was it the junk room, cos he fled from there today? No. It was left on some power cords right next to the fermenting beer vat in the laundry...

Trying to buck myself up and it looks like I am losing out more. My credit card is starting to cost me too much ie I am living it up tooo much (?), and employment advertisments are depressing around here- like they know the person they want EXACTLY, like my skill sets are not upgradeable to even an assistant librarian?

I want to vacuum up information, but that is not cost effective either. Who else around here likes to know about and share shit about archaeology, geomorphology, astronomy, geology, oilfield news... No-one.


A fail for my 50th birthday present though- last year my family [sibs n folks] gave me a voucher for a Ballon Flight over The Big Smoke to be taken by May this year, so I was reminded by my eldest son to get a move on and book it. And guess what? I tried to early this week and was told "The company went belly up before xmas, and no-one was told"- so much for the customer is always right?

Cathartic? I have to tell myself that I do like myself, to smile and to vent and rant more.... Make more friends?

I am really enjoying 'guns, germs and steel' by Jared Diamond 1997.

A new Plonking Addition
For my 50th a matching barrel for the 40th, to put the Garage Grape Sherry into! 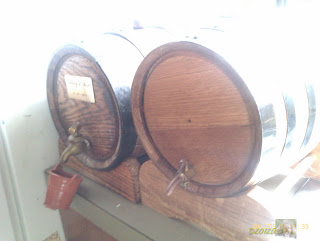