The rain Page here has been updated again. And again- fancier?


I see that the rain pattern appears to be changing IMBY since the mid 2000's. Of all my hobbies started since kids arrived... it has been pretty satisfying to see what goes on IMBY and locally and regionally.

Playing with my excel graphs of monthly recorded rain IMBY [not daily- I think it would have to be re-arranged and not going there as yet...] it looks like the three cycles of rainy/drier has been changed since I have been recording it in the backyard. 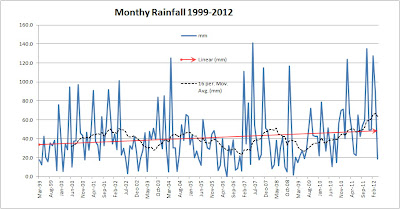 Would you agree, or want to see more data? The  B.O.M. has a lot, maybe if you want you can see if it tallies up as far as a trend change goes. Fair warning, nearest weather data collection to us lies a few kilometres from away.

With a Muttley-like smirk or chuckle, or hiding embarrassment too, but, um, ah, am I right? Am I right?

Besides the 16month moving average cycle, it is the average over time that is also interesting. The drought in SE Australia looks to me to have ended maybe the first half of 2008 or earlier by my records?


At least IMO, these last few years of data shows me that it is heading towards a wetter climate here in SE Oz. IMBY IMHO that is!

Having weather station is nice to have- automation of data collection is a boon, what?

But I am not going down the road of temperature collection, as too many variables may affect the data collection, and I maybe should have started that at the same time as the rain recording, cos I do have and have had a MinMax mercury type thermometer since 1983... The many thermometers I have never agree anyway*...


I hope moving the rain collector gauge won't affect the data a lot, but that was a self imposed OH&S thing! In any case, I wanted to eliminate extra splash from the roof or nearest trees, but I do not think that has happened.
*marvined? Also, have to update that page- the magnificent measurement obsession has got some new additions!
Posted by tony ford at 2:59 PM No comments:

spoiled now, but not tomorrow?
Missed the Lyrids, bloody mist.
here
This might be a nice distraction for you
Posted by tony ford at 1:46 AM No comments:

Having a Go
Saturn Observation

I read a blog- Bad Astronomy. And another
This week there was a recommendation. See The Rings Of Saturn!
Oh boy, this weegen, okay then! Some backyard science again!
Tonight (14 or 15 Apr 12) he said, is the best view, if you have a good telescope, of the Rings about midnight. As Earth is between the Sun and the planet.
Dutifully I waited, and as usual, oh shit, it's midnight and ran around looking for the gear. Set it up in the dark IMBY, with a laser light.
The gear is cheap. About eighty bucks at the post office a few years ago.
But I have seen the moons of Jupiter with it, and Lunar seas and Mountains and craters, so the Rings of Saturn should be a go.
It did take a while, but no rings. This Year. For Moi.
Alas.

The cheapness extended to me too- there was only one medium power eyepiece. I could not put my hands on the rest of the eyepieces of the set! Preparation....
But I think, it maybe too cheap, as there was awe-full distortions, like colour distortions, which reminds me of cheapo binoculars I have had in the past, not glass but plastic lenses.
Ah well, I did try.

Ever tried to really catch a planet in a telescope?
They are bastards!
They move!
Bugger, getting the dang gear to find Saturn was hard enough, then to try to focus in? Oh, the marvined factors; Bad neck and back this week; street light into the backyard. Ended up using the garden table, garden chair and the garden umbrella and a sack of topsoil to sit on to keep track without visual distractions.

If I had me druthers- I would have picked up a better, but still cheap, reflecting 'scope at Aldi that had a motor and GPS for about three hundred bucks, but hey, that was last year.
Posted by tony ford at 2:40 AM No comments: