less than a week
a negative return

The Bowel cancer Kit I was going on about the other week- resulted in a negative result.

Yay me. Nothing on that account to worry aboot. For noo anyway.

I was pointed on a new direction
credentials were not wanted

I am a oil&gas oilpatch specialist. My dear brother managed to find someone that could use a Met- a metallurgist, in his home town, the other side of the Big Smoke. Only by an hour. One guy is said to do a Mon-Fri type deal from this side of TBS. It is that or a daily 6 to 8 hour round trip...

This company really want new staff, and for reason, brother thought I could be available...
The reply was, "slightly off the mark! No worries"

Bugger, but I sent off a CV today, will see if something can be stirred up with someone else via that contact.
Posted by tony ford at 1:31 PM No comments:

This week was interesting.

I received a parcel for personal colon cancer testing, care of the federal government. A kit enclosed for sampling...things. That's nice of them- a freebie for my health.  Free test and free posting.

[What about DENTAL rebates as as well?']

So. Done it and posted it off. There is some tests I don't want to pass... Unless it is a negative for cancer.

And also got a letter from the brain-man about whether or not he thinks I have MS. Threee weekssss later... Well, he does think I have it.

So that's not a good thing. Either I do or I don't. And I do not really trust his listening and hearing- according to his notes I may be an overindulger in certain legal activities- one to wit- wine. I have cut down since 2007, may throw a few empty bottles in a week now. My own home made red wines actually tastes better after a night of breathing anyway. The Bundy mix lasts months instead of weeks now.

Well now I want to see my GP Anna, the doctor that seemed to know what I had was strange enough to get it checked. In three weeks... Boy Oh Boy, I can not wait. Hmph. But we'll see.
Posted by tony ford at 1:30 PM No comments:

The Dishlex 300 Dishwasher [DW] that Tarn got us for a kind of Moving Into Our Own Hoose Gift, finally spluttered to a leaky halt the other day. Another thousand dollar household item bit the dust. For the last year I have been trying to ignore the fact that white-goods Do Not Last Forever.

For those that know, there are tricks into kludging a dishwasher back into life, With Out Resorting To A Repair Man, once he has let on His Secrets. Bwahahaha.... and- HAHA, it's an easy DIY!

In any case, for the hundreds of buckaroonies I have shelved out for the dishwasher' upkeep and good humour since 2007 or so [?], I suppose I should be thankful it has lasted so long.

True, since #1Son moved away, the thing was not much used- two days worth of crockery and cutlery used by four people only just fills up a 12-place dishwasher. Cooking gear aside. And hand washed.

And if I were back fulltime as a RigPigGeo, it would have been replaced about four years ago as a "may as well get another DW, what's a grand anyway...?"

But today, I bit the foolhardy unlucky tooth, gritted my worn out gums, cinched the belt and let the credit card fly. Because this week [do not smirk, dear reader], we had to wash the dishes by hand...

The DW had really worn out. To prove it to myself, I took it apart to discover that rust and leaky parts do not a happy DW make.

In ten minutes I found: The hinge on one side was nearly rusted through. The seals had gone. The safety flood switch had been in constant use for a month. Could not track the fault. So I did not find out the real problem. For a call out fee of nearly a hundred bucks---- hmmmm. NO!

The poor old thing. The racks were definitely falling apart and the cutlery crate was a crappy 2nd hand thing, a replacement for a worn out original. The rack wheels had been replaced not that long ago as well!

I could have kept it for parts, but being thirteen years old- for what? I am not a full blown hoarder, but the parts were not going to fit any new machine. Ever.

I have to keep on telling myself that there are "No Reusable Parts"... Anymore. Not even for the Still...

The white-good marketeers had me by the goolies nearly, but a bit of huntin' round found me a bargain I hope. Funnily enough, I must have had a premonition, because I had only looked around the other day... And it is a cheaper, less economical by water and power use than the last one, but the sales guy said that these days, it is hard to expect the things to last more than five or six years... WTF? Anyway, I was not gunna try the extended warranty shite he was trying to get me to buy for Another Sixty Bucks!?

Five hundred doubloons lighter later, and 30 minutes of bastardising around the kitchen, DADADAAAAA!

And then I had to find a way to get rid of the old machine. The hard rubbish collectors had done our street by last Friday, so I had to ask permission of a contact to leave the thing on the roadside at their place, a few blocks away, where the removal guys had not been...

The other week, towards the end of September, mid Spring here, there was an ominous sound coming from the central heating motor, built into a the wall of the other smallest room in the house.

Then later that night- there was a distinct burnt dust and almost a ozone smell like a burnt electrical motor... 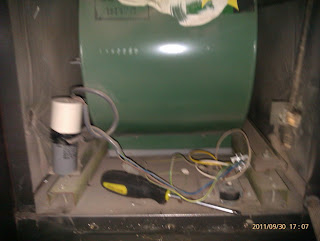 There was no warm air coming out... The motor had cut out.

Next day, I called around the local rural town for a sparky or gas fitter to give me a quick evaluation of the situation and a quote, and no one was available!

Another ring around mid week and finally a bloke was tracked down.

He was able to squeeze us into his tight schedule, and came around at the end of the week. I showed him the cretinous treasonous bstd thing hiding away in the closet.

"Well, you may be able to save yourself some money if you can get the motor out."
"why? How much do you think it may cost?" 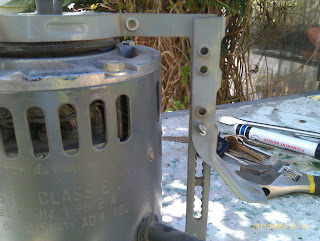 "At eighty five dollars an hour..."

So I did it. 45 minutes. Remove covers.
Disassemble the fan unit
The size of the thing surprised me- about the size of a half pound coffee can.
That was all that was needed to heat the house up in less than ten minutes?!

At the the electrical motor rewinding shop, the  felllas looked at it yesterday and I picked up the dang thing today, and irt only needed to be fitted with new bearings. One of the old ones was close to siezed!

Back home with most of my money!
Half an hour later- whrrrrrrrrmmmmmmmm and warmth!

I DID IT!
So thanks Matt for showing me how to save some dough.

Trying to adjust to bad  and good news

The neurologist gave me the news, not good, not altogether bad.

If left eye tells me a thing is red, and the right says, Nah Mate, its greyish and a bit more pinky brown red than red, what is going on.

Three years ago, my eye doc said take a few tests.
And nothing was seen to be wrong with my eye sight.

The year before I remember tryinhg to explain to an uncle and some others this strange thing- nada- blank looks from them all.

But is was there.

Since then I have been wondering about how left and right eye tell me different things in this case.

Finally, after the MS diagnosis- and further free ranging thought, I think this is the explanation:

A signal [red colours] may indeed go to the particular and separate processing places in the brain for each eye, but it must also be shared or leaked between them so a comparison can be made and evaluated as to the validity of the signals captured by the retinas. The overall grayness too can be more apparent at time, especially trying to read.

And then once codified or validated, then passed onto the Mind for further assessment- Red Corvette or Burgandy Corvette?
A test is a Ferrari- no greyish burgandy-ish red Ferraris: so the right eye signals are off by nearly that much.

I once used rock colour chart books in my old mudlogging job in oil and gas exploration, and wished I still had one, and then I could tell you what I mean by a simple alphanumeric code what left and right eyes see.

But now, I see that the website chart available can not go to that finer gradation, that shade tone tint that is the difference I can see. Bugger. Well, today anyway.
Posted by tony ford at 1:45 PM No comments: