Digging through the past

Is it right to dig and send
Torn by what I think, the "ethicalness" of it all

As I have scanned through a mine field of memories, or should I say, recalled mind sets of yesteryear, I wonder at the clarity of the images my parents gathered while I was growing up, and can I post off images to old friends of renewed acquaintance. My poll question has no replies as yet- a reverberating, silent, NO?

So does digging through the past help me at all? Not that I need help! I mean, I think this: I treasure the childhood memories, and is it going too far, and who really cares. APART from me, dummy

With the scanning project- So far, I have got to my eighth (try spelling that a few times!) birthday party, and a group of kids sitting about a table singing or eating. I am pretty sure it was my first party with friends, and the images bring back memories of those kids. Thirteen years of being in the same classes with some of them.

No one has really bothered to keep in touch with me or many other people since I left that town, apart from using social network sites. Like as if, attending those Catholic schools did not engender a strong network of friends forever, compared to today. I have tracked a few people via Google, FriendsReunited and FaceBook, and now count them as names, not actual real friends, on a list as most just acknowledged me. But Robyn says ello now and again. Mick, Trev, Brigitta, Lisa Z and even others from uni are not into that tech thing I guess. Not that I would leap into the car and go see them for a drink.  A few thousand miles for a beer is not my sort of thing, nor flying them down for a weegen either! Once maybe... But then Chris and MArsh, I might- But I missed Chris' 50th and prob Marsh's too. Bugger.

I could not track Macca my best friend from the primary and secondary schools down at all the last ten years, and had to resort to search engines, found an email address that turned out to be his sister. That was cool- a tech win for me. What is funny is that my old girl friend, next went out with a guy, that next married Macca's sister, now they are divorced. Circles of shit. Maybe I am better off not knowing everybody's news, I certainly don't like my sad parts. 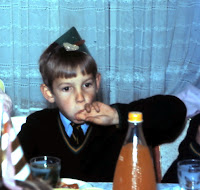 One image of the group has my best friend doing the bottle popping sound with finger and side of the mouth- Macca was famous for that. Up until the end of high school, we were mates. When I left our town for uni, but made few trips back, he was one guy from school I tried to remain in contact with. After a while we drifted apart, and only through our parents did I manage to keep track. learnt he has kids younger than me! Whoa there, really?

Another kid at the party, Paul, was the adopted male son of boy-girl twins, Helen was his sister. Paul's dad attended a business school nearby, and when he was 10, they took them to America, to the land of the then very strange way of- "Commuting" - to work through the- "beltways" - of Washington. That I remember that strange word or two was because of a conversation dimly remembered between his mother and mine. On their return to Oz, he was placed in the Anglican secondary school, and we never saw each other again.

Gerard was there too, a nice kid, his dad was a cop. They were transferred elsewhere the next year, but I do use his name and face to remember that I had a childhood full of friends. The two other faces I cannot see properly, but I imagine one would have been Terry Tugboat, and the other, quiet Wayne. I made up Terry's name lying on the rye grass of a gently sloping playground, staring up at the blue sky and fuzzy clouds a few years later. Terry the Tugboat seemed pretty funny. Macca, Supermidget, Tug and Broomy.

The little girls I knew at the time are now either mother or grandmothers, maybe divorced and or childless. Some I liked back then, Lis and Kim, are divorced, which is weird. And if I say that now that I could see that coming back then- you would larf an larf in disbelief, ROFL probably. However, I was hurt to see those girls go through that shit.

So the question remains. Should I be a complete dippy nerd and search, and post off these images of these kids to their "parents" as it were?
Posted by tony ford at 1:47 AM