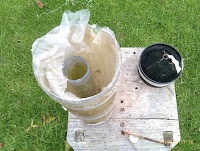 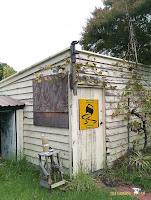 Being plastic (from Nylex as well?!) it got brittle. Getting up on a shaky homemade stool... I had dropped it twice over the years, and repaired twice with super glue, the last time with some freezer bags too... Cracked it then actually broken the second time actually. Tape and plastic bags do not do a great job
, but better than vinegar and brown paper! It did not help that I had it mounted well over my head, on the roof, top corner, of the former Alcoholery (now plain Shed to some & Vacant as Son#1 is at Uni, and #2 Son wants to move in So Bad...), but the backyard, I thought, was not clear enough of low plant life to mount the collector by itself, just near the ground.  Pictured above and at right

Once back together again, it was okay, as I did have the digital recorder, the 'backup'.
But I think it also a) leaked in  or b) absorbed moisture, because there was always something to measure, even over a dry week...

Meanwhile...
There was a special a while ago at the hardware store for a cheap replacement- missed out. 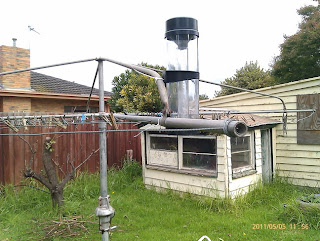 Last week, after a little spending spree elsewhere, I thought, bugger it, let's get a new collector.

Ta da! Twenty bucks man! Oh yeah, measure up to 250mm rain- just what I need if the climate changes so much more differently than anyone expected in the next fourteen years!

A label on another box, the Rolls Royce model naturally, said where it should be mounted.

This time it is just over my head.
And so clean...
On the clothes line instead.