So excited for the builders, I hope there is nothing I will miss.
Maybe I better get a building a hoose book.

Is is there a Supervising Building A Hoose For Dummies Book out there somewhere?

I am trying to do a weekly blog over here, or start another, better find that measuring tape!
Posted by tony ford at 4:51 PM No comments:

I thought I had some chardonnay in The Portable Vineyard pots the last two years or more.
Wrong. 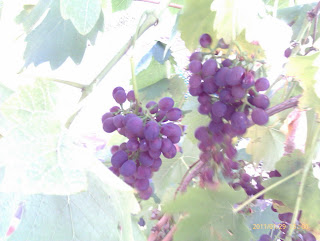 With some verasion occurring in the crop ( of two pots...) this last week (!) since they last were watered (it has been wet down here), this means they are Pinot instead (I think).
Or cross pollinated?


I thought I had it all sorted AND labelled last year...
I had separated the pots (5 + 4) according to the then ripened fruit displayed into 7 and 2, but now...


So I have (potentially) 9 Pinot Noir vines and maybe up to 12 baby vines coming along...


I am hoping to get more fruit than last year- I made nearly a whole litre and a bit, that turned into vinegar...
But even then, it was a Great Tasting Vinegar!

Busier Than Joan of Arc

(First, please stand around before I notice you)...A bit more... A bit more.. okay the stack looks great.
Ah, hello? Hm, that person that said yesterday you could get that item is AWAY, so sorry.
But what about this slightly shop soiled item?
NO? I know there is no box, sorry. But there is a fitting for it here somewhere...
No, I cannot find the substitiute here... Oh you found it, yes, it's not quite what you want but at that price, its only a name after-all...
This other one? That last one? It is more expensive- and probably the same people make it too... Mmm, may not fit? Reduce it more? No, sorry. So that one will do?
Okay, thanks and bye bye.
Kerchink.

RRRgggghhh. Got it cheaper than the original and not a bad copy anyway. Next...

[I cannot remember a really handy plumber's name or number. He tipped me off a few years ago about a fitting that saved me HEAPS by still letting me DIM*. Bugger.]

First call goes to "PLEASE  LEA" and thunk!
Next call, 5 rings.....
Hi?
Yes. I need a replacement gas stove top plumbed in.
Ah well, I need to check the..
No, what about price first .
AH, um, no, I will have to see how it is to be put in...
No- it should slot straight in- you just check for leaks.
Um- well, it might take hours, alterations...
It really should slot straight in.
Yeah but...
Here's my number, call me and look at what has to be done so I can at least get a quote, no rush.
Okay.

My Tarn used to hate tradies.
I did not, even though they have pulled a coupla quickies on me- I.E. radiator filling cap left off at the filling station, the hot water gas system siphoning all the gas heater gas away so that Nothing was warm for a few days.... Well, to be fair, the second time they may have been misled. But they were still morons. Same with the third lot. Simple water dishwasher plumbing and I can still taste the thread compound ten years later. I can I tell you no-one else can- weird.

I really would put this stove top hobb plate thingo in myself, but it is a gas plumbing jobby, and I really cannot afford to lose the house because of a marvin type situation- this expert better do it efficiently as possible or I could be ranting for years....

#2 sons pc was taking toooooo llllooonnnggg to boot up- and then was really slow as well. Like an old truck, took a while to get up to running speed.
I wonder whether it was all the bike and skateboard web crap he had been through, leaving nasty piles of stuff in there since the last exercise of formating his pc. Or the anti virus rechecking everything. And rechecking...
The computer shop would like nearly two hundred dollars to back me up on that.
That's nice I said. We did have proper anti this and that, thanks.
He only had 5mb left out of 38gb, now really!
Out with old crap. Did that help? Nah. Took out a photo album collection- (a backup- 10gb)
Back up all the stuff you really want to keep. Okay. Weeks later- All backed up? Think sooo.
Ah well. Bite the bullet, and bad luck as I am going in.... at two thirty Sunday afternoon. Start the format of said pc ( and have a shower while waiting- It was getting warm again) and started re-installation of the OS, AV and of course Chrome and to be done later--- iTunes.
I was not going down the path of a five hundred dollar pc or netbook! No way! All the kid "needed" was music and a browser for hotmail and facebook... and maybe a wordprocessor.
So, Microsoft still supported XP so there was monstrous downloading. Rebootings
In the meantime, after a time away for my TV time, and even after I said No Not Yet to iTunes because I was trying to get the little box going properly, there it was-  a search for music by iTunes- ARGGGG!
Rebootings. Ad infinitum! I think there was duplication in there, but really, so much time.
And then, this morning. Finally, a last patch download and Hi Nibs Music finally transferred from the backup, and another rebooting...
But. NO SOUND, dad, iTunes did not work!
So was the speakers plugged in- yes. Ok then, after work I will check it out.
Get back and... smaller speakers jacked in... and not working.
The sound board was not included in the installation for some dang reason. So back to the hoarded boxes of old pc gear, haul out the motherboard installation cd, another Rebooting and LO and Behold, SOUND.
Eight hours at hundred bucks an hour... maybe that's why it is so expensive- psychological couch time for the experts after fixing up a dang machine......
Any thanks?  ... waiting.
Posted by tony ford at 9:36 PM No comments:

Yesterday my friend Harry called about lunchtime to see whether I would Like To Go Sailing.
I spose so after work I replied.
I got to Lake Wellington by 4pm, and the wind was a gentle constant warm movement through my fingers.
The other fellows there had sails set already, about  6m size. So I brought out my 13 year old veteran racing sail and a bump and jump board that is seldom used.
The new harness lines on the boom were to be set up weeks ago! So there went ten minutes, and then once out on the water the setup was wrong. It was back to the beach to reset them properly and out again. Three times. At least the water  temperature was nice- Hawaii nice!
After nearly an hour, so much frigging with the rigging and falling in with wind dropping on a gybe, I was tired. On the plane was good and fast, but in fresh water- the whitecaps are deceiving. I think the wind velocity was dropping.
The last run out, I was getting some cramps in the legs trying to start in the shakloows and water starting. It had been a few months since the last sailing outing, and my ftness had decreased more!
On the last gybe of the day, started well and then kerplonk. Back in the drink, and the wind had fallen off. I could not raise the sail. For about twenty minutes the other guys sailed around me, okay? they asked- yeah. Then they disappeared.
I did not get to sail home. I drifted in to the shore. I walked back along the shore, managed a little sail, and then swung the rig and board on to my head and stalked out of the water to some grass, threw the kit down, tore off the seat harness and stomped back to the van, where a coolish light carbs & low alcohol beer awaited, or cola. Guess which one went down pretty fast...
The others had nearly packed up. My friend had gone down along the shore in case I quit further away to pick me up- onya Harry, but I made it back. Not often I cannot!
Not to stew, had a yak with them, then drove off to rig down and pack up the gear. Arrived home to make pizzas for the kids and me at about 6.30, in time for the tomorrows weather...
Posted by tony ford at 5:29 PM No comments:

Moving Pics from there to here abouts

For those that care.
I am reducing the Netspace Easter Photo site.
The Easter Clan Pics are here now:
Taggerty Clan Easters 03, 04, 06 08
Moranghurk Clan Easters 09, 10
Posted by tony ford at 3:36 PM No comments: