As you know by now, I like cutting out the experts, and fixing or doing home improvements all by myself. It is not rocket surgery.
However.
The previous owners (in the 1980's) of my place of residence  [as of 2010] liked to make sure that the new owners (them and us) enjoyed a modernised Victorian/Edwardian type built house (1913),  but without the outside facilities! The was only  a modicum of electrical outlets around each and EVERY room. Like- ONE!? There was a wine cellar, irrigation for the garden and fruit trees and a garage to garage a Mini Minor {FYI  a very small car}. And  Tool Shed. ( The to be Alcoholery!)*
So an eon ago, the renovations were that the laundry and bathroom facilities were combined within the house, but in a room large enough to swing a cat by it's tail- fair dinkum, (just pivot upon one foot!). And a legacy hot water system. Another story.
Past readers may remember I cleaned the bathroom outfall recently. To great success IMHO.
Last weekend I took it upon myself to clean the U-tube of the shower as egress of the waste water was slowing down again, and having five people shower (almost) everyday, meant that hair was a problem, to be cleaned up by the adult - later on of course...
A newish wire clothes hanger was undone and rebent (old ones are too stiff) as a hook for this jetsam (it doesn't float). At least that worked, but - not a lot was gained. The outflow was Still slow, and puddling up towards my ankles.
The old maxim of if it works leave it----- I still don't leave things alone even if it looks okay even a small bit...
So under the house I went, with the trusty tools of old- they worked last time anyway. It was not gunna take that long, three little plastic couplings! But being plastic plumbing pipe, it looked now like it would only handle one more monkey wrench - especially being recessed in the floorboards immediately adjacent to a bearer. The tools were difficult to use. Got it apart.
I cleaned out NOTHING from the pipes, NOTHING.
And then, would it all connect up again without a LEAK. BAH, NO-  so it could wait. Two hours Saturday, no tools could tighten the fittings, diy shops shut. Surely the o-rings were in place? Course- who would leave them out, or back to front? Baths only- at least that drains after you have finished.
My shoulders ached for NO reason early Sunday morning- what had I been doing lately for that!? AH! The DIY under the house- where I had moved the bricks to make room was still only enough to slide in under the flooring from the wine cellar, and on Saturday, it was uncomfortable, a bit. Would middle teenaged second boy have to have his first bath in years prior to Leaving for a Tassie trip via a ferry at lunch time... So try a another time to tighten up the ferrules. Nah- Bath time mate. Then drop him off at the city/ferry bound coach with a bunch of other kids. See you, be Good and have a good time, BYE!
Then to the shop.
Sunday. Two hours! - had to buy a tool just for plastic fittings at near closing time...
Still LEAKS! Even with another hand (#1 son) "up there" in the shower to apply torque, no success.
Monday, still no success! Another tool to make sure that one fitting was sealing the gap between the shower floor and the outlet. Forty dollars down. Six hours time. Shoulders sore enough to make me cringe on lifting my arms. Bugger it.
Tuesday. I was already down the street, and with no deliveries to do, why not get some NEW FITTINGS? $20 only!!
Got back . Half naked to change into grungy clothes, I was about to Get Back Under The Floor at 10:30am, and a little knock on the back door?! I had to cry wolf to a friend who would have loved to have had a coffee and so with a "Please let me fix this before I get a bulldozer in?", I missed out on a coffee break and was left alone with the Beast Under The Floor. Again.
The new fittings! But I could not get one old top one out! Well, they screwed together at first. Better to leave that one... Sawed and chiseled the bastard piece that would not undo with any cajoling, swearing or brute force on the specially bought tools... Had thought to use a little jet flame to melt the lot! Hmm mm. Nah, get going mate!
An hour later- no nearer to tightening up that last few turns!!!! COFFEEEEEEEEE
Work interrupted a fair bit of swearing a little later....
SILASTIC!!! Looked like that was the only way? NO!!!
So it was tightened up by 1:30pm.
LEAKS...... @#$%^&* !
"SILASTIC!!!!" I replied to my really annoyed tired perplexed and by now lazy bloody self!
Where? EVERY JOINT YOU IDIOT!
Seemed to work. So nearly ten hours later and down about sixty bucks, I think I tamed the Leaky Beast I had created
Had a shower and went off to band practice with the twins, with a drop of water hanging off the U-tube. More silastics rather than hysterics, me-thinks...
*The Forever Bride did not notice  discrepancies, and anyway, we could always add a ensuite anywhere we wanted to! Sure.
Posted by tony ford at 11:02 AM No comments:

At Last, A grrreat Sailing Sess-shon

I was going sailing. The weather had not been that great for me for ages- I need a good breeze from the south west, not WSW or SSW, just SW. My younger brother, Sime, had been on the blower a few times over the last few weeks about going south to my favourite sailboard sailing spot in Australia and getting wet and tired.

I retired hurt from the field with sore ribs (suspected fracture?) last year. After crashing out after a catapult at speed I had returned to shore for a snack and figuratively lick my wounds. When I returned to the waters edge for another speed run, I could not raise the boom above my shoulders. Owwwww! "Limped" home 150km and tried to not cough, sneeze or even laugh for a few weeks. I have only been back once since then.

Last weekend- I got out all my speed sailing gear. My board is a a 'Speed' slalom type, early nineties. A 5.9m2 course racing sail by Neil Pryde. A30cm slalom fin. A speed seat/waist harness. Carbon fiber lightweight mast. A thin boom. And spares. Floss and needle. Screwdrivers. Socket and knife combo. A few spare sails and masts and booms. Spare board, a Fanatic Cross 100, hardly ever used, as it is a bump and jump freestyle type. Did not check everything though. 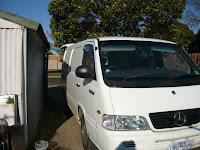 All loaded into the latest sailing vehicle, a Mercedes 2.9L van. Easily.

Fueled up and left by 6:55am, and arrived at 8:30 with a full tide, up to the tree line, so I eased the van around the beach in shallow water. First to arrive! Sime messaged, he had left the big smoke, would be there in 90 minutes. He was not going to miss much, the wind was sketchy and slight from the NW.


I thought to rig two sails to match conditions, the racing rig and a smaller 4.5m2.
Hitch! The spare masts were incorrect for the chosen sail- too big or too small= ERGH!! Ah well, just have to de-rig the big one if I had to. Marvined.

Then the harness lines turned out to be shot! Tried to fix or replace them, but I was out of luck, I would have to just carry on with what I had.

Sime had a few friends there too by lunchtime.
He encouraged me to ask to try a demonstration board and rig- Lightwind short board (ultra wide!) and a 8.5m2 sail! It was suggested that since I had not been out for a while, I better try a smaller setup- OK.
One run was fine- I had not lost my skills- came back without falling in. Now for that big rig.


I was gob-smacked. As I sped back up the course, I was thinking,

GET THE CREDIT CARD!

It was great, and on the edge of my capabilities, I did not have weight enough to hold down the rail, I could not steer quick enough among the other Slower Sailors! Specially ones that capsized in front of cos they did not realise I was THERE. But I did not crash out, or try any smart maneuvers either.

I want that setup. Me and my old board and sail let me down along with the slow conditions and my own unfitness. I spent more time swimming to the bank than actually sailing. That's the rig below- once set up right, it still does a good job.

I need new harness lines too, they are in the post- but I will not get it in time for the weekend!

Can't wait for another sess-shon!!
Posted by tony ford at 12:10 AM No comments: